Dot Dash and Remote Control Records are incredibly excited to announce the signing of Melbourne based 9-piece Dorsal Fins.

The band have today shared the first single ‘Sedated’ from their forthcoming record. To celebrate the release, Dorsal Fins will be playing a string of east coast dates in Melbourne, Sydney, Byron and Brisbane throughout August.

Dorsal Fins’ Jarrad Brown had this to say about the new single. “When the sun slinks way too low, and the stars forget to shine, and you need a cryogenic sleep chamber to knock you out and wake up somewhere a 1000 years in the future… you write a song like Sedated.. and then you feel better.”

Their new LP will be released later in 2016 via Dot Dash / Captured Tracks in North America and Dot Dash / Remote Control Records for the rest of the world. 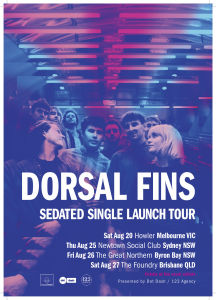