Jack Ladder & The Dreamlanders have announced their return with the darkly beautiful ‘White Flag’, the first taste from their forthcoming album Blue Poles, to be released Friday 4 May. Watch the video to ‘White Flag below!

The spectacular video was shot in Indonesia by visual mastermind Wilk and directed by Jim Pillion. “It’s written from two perspectives”, says Ladder. “I didn’t want to duet so I sang both parts. It allows for more mystery.”

Blue Poles will be the fifth album from one of the most singular characters in Australian music. Sentimental and mournful, sardonic and surreal. Jack Ladder brings that towering and tender baritone to bear on tales of beauty, love, hope and redemption. Pre-order Blue Poles here.

Burke Reid produced HURTSVILLE, Kim Moyes shaped Playmates, but this time Jack Ladder takes total control of his creative process. “Blue Poles is the most melodic thing I’ve ever done”, he reflects. “I really pushed myself into some uncomfortable places.”

Blue Poles was recorded at Oceanic Studios in Sydney, engineered by Tim Whitten and mixed in Los Angeles by Noah Georgeson. Once again he’s joined by The Dreamlanders, Australia’s very own misfit supergroup made up of Donny Benét on bass, Laurence Pike on drums and this time two guitarists – Kirin J Callinan and Ben Hauptmann.

The band have also announced a run of east coast launch shows to celebrate. Tickets and info below. 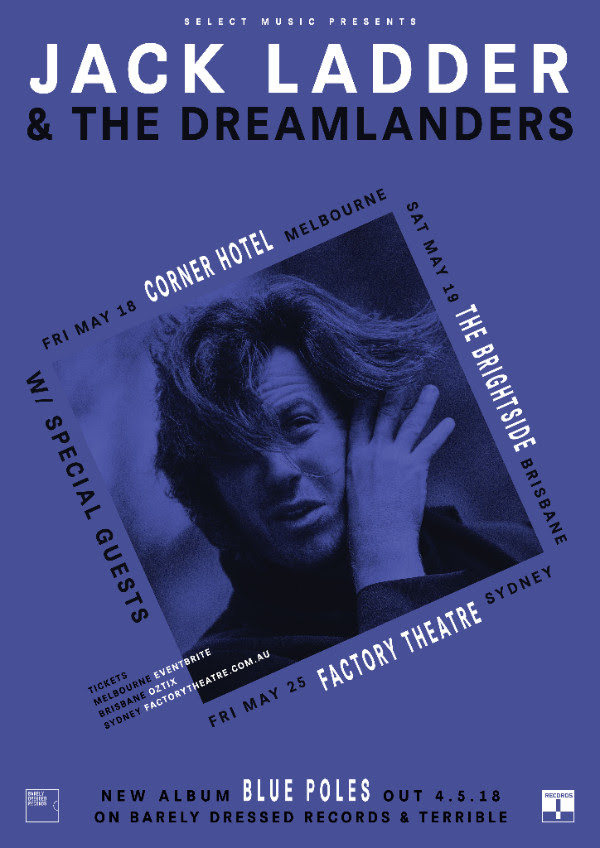 Sat 19 May – The Brightside, Brisbane
Tickets